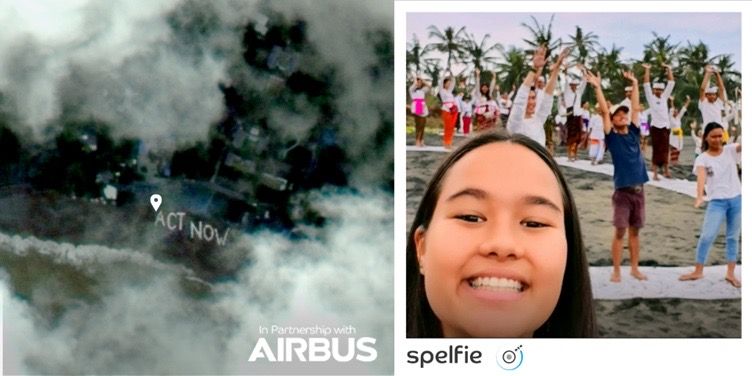 A free application known as Spelfie allows users to capture images of themselves from space, courtesy of the cameras installed on Airbus Earth-observatory satellites.

These cameras are, of course, not powerful enough for capturing your face. But, the space selfies could offer a new dimension on your presence at huge events such as football games and concerts, or act as a platform to form words about problems which are significant to you.

For instance, the first ‘spelfie’ captured in June features one group of individuals lined up at a beach in order to formulate the words ‘ACT NOW.’ These people belong to a village on Bali’s Indonesian Island and they were trying to make people aware about the increasing plastic pollution that is affecting this tropical region as well as several other places across the globe.

That spelfie was revealed recently in the ‘Saving Out Beautiful Bali’ documentary by BBC. The documentary is based upon the efforts of teen environmental campaigner Isabel Wijsen, who is also the organizer of ‘ACT NOW.’

In a statement, the CEO of Spelfie, Chris Newlands said that the app is a movement of people that wish to bring about a difference in the world via imagery and social media. Spelfie can help in raising awareness worldwide, motivating others to take part and change the world, Newlands added.

Ayden police use new App to connect with residents

Ayden police use new App to connect with residents