Battlefield 2042 released as Early Access on November 12 – it will officially launch on November 19. Although it was one of the much-awaited video games of 2021, the long list of reported bugs ruined it for most fans. Some would argue that the game is still in Early Access, and as per usual statistics, video games tend to act up during early access or beta stages. But, it could have been acceptable if EA didn’t charge the extra dollars to access the game now. They could have made Early Access free for Standard Edition owners too. But, the game is literally unplayable right now with all the unaddressed issues. Why would players pay extra for early access in such a situation?

The error code 25 is just one of the persisting error codes in-game. It is one of the several other bugs that require immediate attention to make the game playable again.

Also Read: Battlefield 2042 part of menu screen cutting off on Xbox and Play Station: Can you change/adjust HUD & screen size? 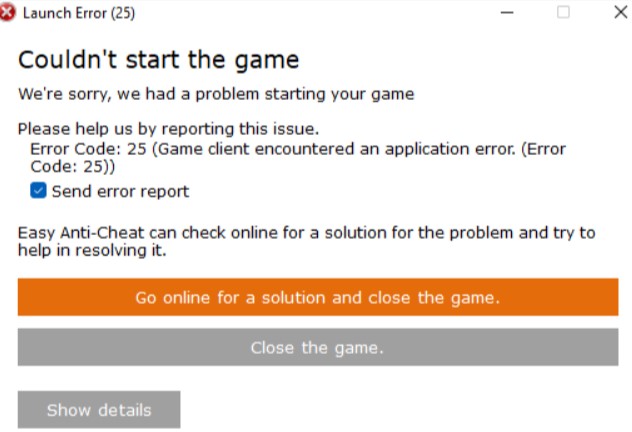 From the error window above, we can figure out that the error may be related to Easy Anti Cheat. Easy Anti Cheat is an anti-cheat service for video games – Battlefield 2042 is powered by it. So, it looks like there’s some kind of integration issue between the two applications. So, some players were able to solve the issue by reinstalling the Easy Anti Cheat service. To repair it, navigate to the folder of Battlefield 2042, and open the EasyAntiCheat folder inside it. Now, open the EasyAntiCheat_Setup, select Current (Game 609), and hit ‘Repair Service’. Restart your PC once you are done, and try launching the game now. If you are still facing issues, make sure you have the latest Windows version, and all the graphic drivers on your system are updated.

Most players have tried all the usual fixes like verifying the integrity of files, updating graphic drivers, reinstalling Anti Cheat, reinstalling the game and many more. But, none of them could get rid of the error code 25 entirely. Right now, we can only wait for EA to return to their senses and fix the error code 25 and other bugs in the game. We hope the day comes soon! Stay tuned to Androidgram for more updates.

Forza Horizon (FH) 5 Login Loop Issue: How to fix it

Forza Horizon (FH) 5 Login Loop Issue: How to fix it