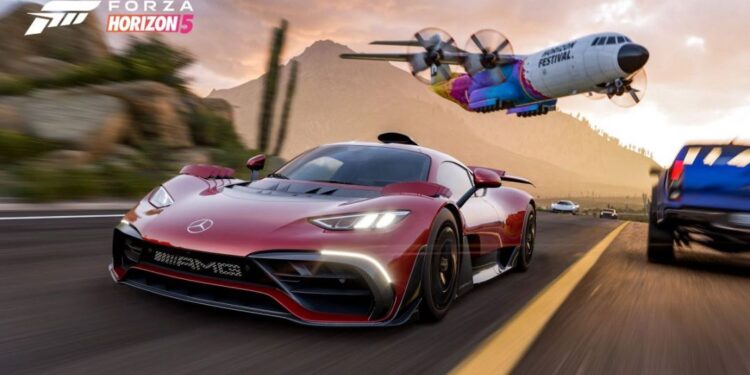 Addicted to the intro song of Forza Horizon 5? Well, according to reports, fans have been going crazy over the intro music composition. When you launch the game, a slideshow of some extremely beautiful landscapes shows up along with a serene track playing in the background. That led to a lot of fans looking for the music composer and the title of the track. Read this article to know where to find the intro music of Forza Horizon 5.

Many Forza content creators and streamers had gotten their hands on an early copy of the game in October 2021. But it was not until November 9, 2021, that the game was officially released for fans. Peeps who got the Premium Edition could access Forza Horizon 5’s beautiful map from November 5 [early access]. However, Playground Games hadn’t revealed all the music tracks featured in the game. The intro song, which was termed by fans as “extremely peaceful and addictive”, wasn’t revealed even at launch. Hence, several fans were frantically looking for details regarding the game’s intro song. This continued until mid-December when Playground Games finally decided to share the intro song details with fans. The intro track was officially released on Forza’s Youtube Channel. Finally!

What is the intro song in Forza Horizon 5?

Urbandawn, also known as Wrechiski, is responsible for creating the intro song in Forza Horizon. The track is titled “Encanto” which is Spanish for “Charm”. Charming, indeed! Urbandawn, born in Brazil, is a musical artist majorly known for his masterpiece “Come Together”. He has also created a few other exclusives for Forza Horizon. Even before the track “Encanto” was officially released on Forza’s Youtube Channel, several fans had recorded hours of it and uploaded the same on Youtube. Being a track that promotes mindfulness, everyone wanted to hear the track on repeat. However, leading online music distribution platforms like Spotify and Apple Music doesn’t yet feature a high definition version of the track yet.

Most fans have found themselves wanting to spend several minutes on the intro video of Forza Horizon 5, just to listen to Encanto. However, the track doesn’t give off a racing game vibe. After all, “Peace” is not equivalent to “Racing” and “Competition”. Forza Horizon 5 is mostly characterized as a racing game, although sometimes it heavily comes across as a “driving adventure”. Well, fans loved Encanto irrespective of the vibe. You can check out the official version of the song here. For more articles, stay tuned to Androidgram!