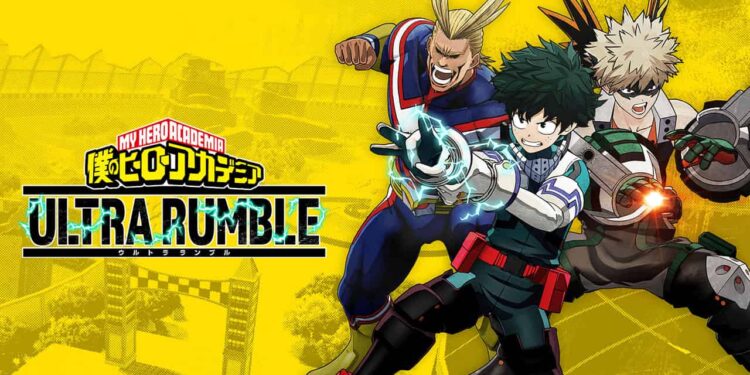 Bandai Namco has announced My Hero Academia: Ultra Rumble, a new game based on the famous anime series My Hero Academia. Ultra Rumble is a free-to-play battle royale game that will be released on Steam for the Nintendo Switch, PS4, Xbox One, and PC.

According to Gemastu, Namco unveiled the game in the newest issue of Weekly Jump. There’s no word on when it’ll be released, but according to the press release, it’ll allow users to “team up to win a 24-player rumble in multiplayer action!”

My Hero Academia: Ultra Rumble will be accessible in a closed beta test prior to its release. However, this isn’t the first time a game has been based on an anime series. Bandai Namco published My Hero Academia: Battle for All on the Nintendo 3DS in 2016, and in 2018, the developer followed up with My Hero: One’s Justice, a sequel dubbed My Hero One’s Justice 2.

My Hero Academia is a manga (Japanese comic book) series set in a universe populated by superheroes. The series has been converted into an anime and three films. It has a total of $40 million USD (approximately $50 million CAD) in international box office receipts.

Previous Games of My Hero Academia

It’s worth noting that the upcoming battle royale game isn’t the first video game adaptation of the popular anime My Hero Academia. It has previously launched two fighters as well as a mobile phone game. This time, it’ll take part in the popular battle royale mode, which is akin to popular games like “Fortnite” and “Call of Duty: Warzone.” Meanwhile, in a crossover with “Call of Duty Vanguard,” “Warzone” is introducing another anime series, “Attack on Titan,” to the battle royale genre.

Only Japanese citizens are eligible to participate in the closed beta. Furthermore, the upcoming test will only be available on PS4 and PS5. Unfortunately, no demo for additional areas, consoles, or PC has been announced. If you live in Japan and own a PS4 or PS5, you may only register between the 17th and the 28th of January. Only 10,000 participants will be chosen at random to take part in the contest. The winners will be notified on January 31st.

The closed beta for My Hero Academia Ultra Rumble, a battle royale game, will be released on February 2nd. The MHA restricted demo will run till the 6th of February. Unfortunately, we do not know when the game will be available to the general public. The game will be playable on PlayStation 4, Xbox One, PC, and Nintendo Switch whenever it is released.

How Long It Takes For Minecraft Turtle Egg To Hatch?