Animation is what makes virtual content come to life. In video games, animations are one of the most important aspects of mechanics. Animations are attached to particular inputs. So, when you click/press a button, you see action on the screen. Basically, we cannot imagine video games without animations. Sports simulation video games are judged mostly on how well the game can mimic the actual sport. NBA 2K22 is a simulation of one of the world’s most popular sport, Basketball. NBA players are known over the world for their great physique and ability to perform insanely perfect moves while scoring those amazing goals. Of course, the developers have included the most common but amazing moves performed by NBA players in NBA 2K22 as animations. So, how do you get your character to perform those moves in-game? Read this article to know. 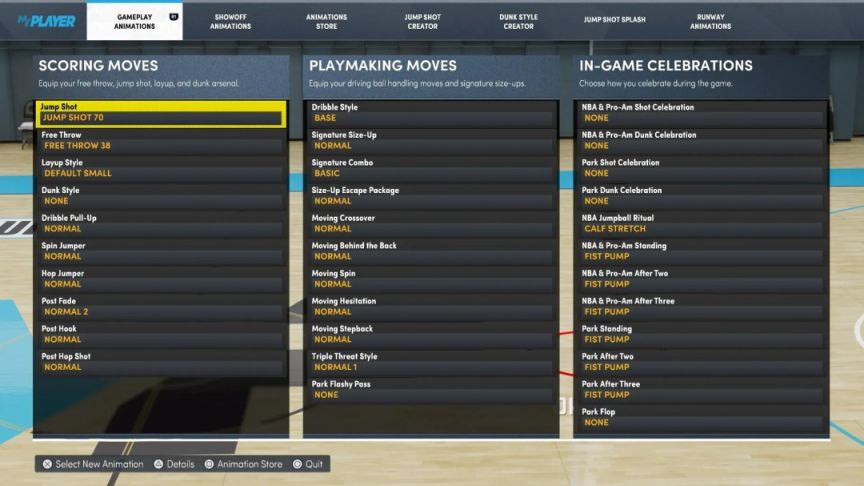 How to buy, equip and get animations in NBA 2K22?

In order to buy animations, you have to go to the animations store in the game. First, open up the menu and select the MyPLAYER option and then click on the ANIMATION option menu. Then, click on Animations Store. Here, you will find all the animations you can buy in NBA 2K22. Scoring moves ranging from jump shots, dribble pull-ups, spin jumpers, dunk styles, layup styles, and free throws: you can get it all from here. Also, you can get other animations like playmaking moves, in-game celebrations, intros and outros, and city emotes. However, check whether you have unlocked the moves you want to get. Some of the premium moves will be locked or restricted. The more you play the main modes of the game, the more animations you unlock. While you can get most of them for free, there are some premium moves that require you to use VC.

So, once you buy the moves you want, you will want to equip them. To do so, go to the Gameplay Animations option menu. There you will find a list of all the equipped scoring moves, playmaking moves, and in-game celebrations. Click on the move style you want to change, and a pop-up window will appear where you will be able to equip the move you want from the list of owned moves. That’s it. Your character will now show off his new moves when you play the main game next time. Hope this tutorial helped you. Have fun showing off those new moves!