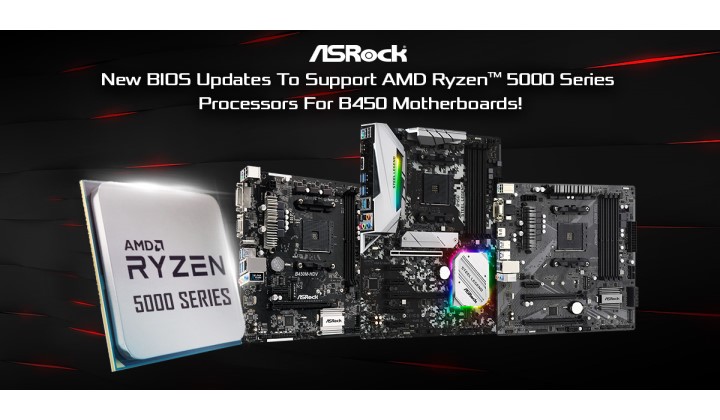 ASRock is known for its quality motherboards and outstanding service years after purchase. ASRock motherboards continue to receive great feedback across social media and online stores like Amazon for delivering the latest and advanced updates. A great update for users who are using the older version of ASRock motherboards, as the support for Ryzen processors just went one level higher.

The latest BIOS update rolling out enables support for AMD Ryzen 5000 series processor on ASRock B450 motherboards. News about this update was announced officially via the ASRock site.

15 motherboards from the B450 line-up users will have been receiving the BIOS update. The update roll-out began yesterday and will soon reach every user of the following motherboards-

If you are using any of the motherboards from the list above, then your system will now support the next-gen AMD Ryzen 5000 series processor. Following this post, another huge tech brand ASUS announced that the ASUS 400-series motherboards will receive the same update firmware, but stable v1.1.8.0 to enable support for the AMD Ryzen 5000 series processors.

B450 motherboards were first available in 2018. A lot of users still used the 300 and 400 series motherboards. So this update is a compatibility bridge between old-gen motherboards and new-gen processors. Not just ASUS, but several other vendors too will announce the update for their custom boards users in the coming week.