Pokemon Unite Voice chat warning : What is it ?

Video games should have a fair and robust report system to report wrongdoings. There will always be players who accept unfair means or abuse a healthy environment in-game. Like all video games, Pokemon Unite also has a very prompt report system. But according to the players, the system may not be fair. Like, the voice chat warning issue many players are facing. The problem with the report system is it lacks proper investigation of the case and imposes a warning or ban even if the player hasn’t done what he is being accused of. This is a serious problem. Players should be careful as these warnings may also lead to permanent bans.

Want to learn more on why Pokemon Unite is getting so much criticism on its report system? Read this article.

Pokemon Unite Voice Chat Warning: When does it appear?

So, Pokemon Unite players are in a protest mode against the report system of the game. Basically, you can report any player you want based on whatever you like. And, the developers wouldn’t even investigate as to whether the report holds. Some players are receiving the voice chat warning in the Pokemon Unite game. Here’s what a Reddit user, reddit_bandito wanted to say

Doesn’t really matter. Players are still getting banned whether they knew VC even existed, if they didn’t use it, etc. The system is entirely automated. You can report enemy players too, so if you lost it’s a great way to abuse the automated system and take it out on the guys that whipped you. 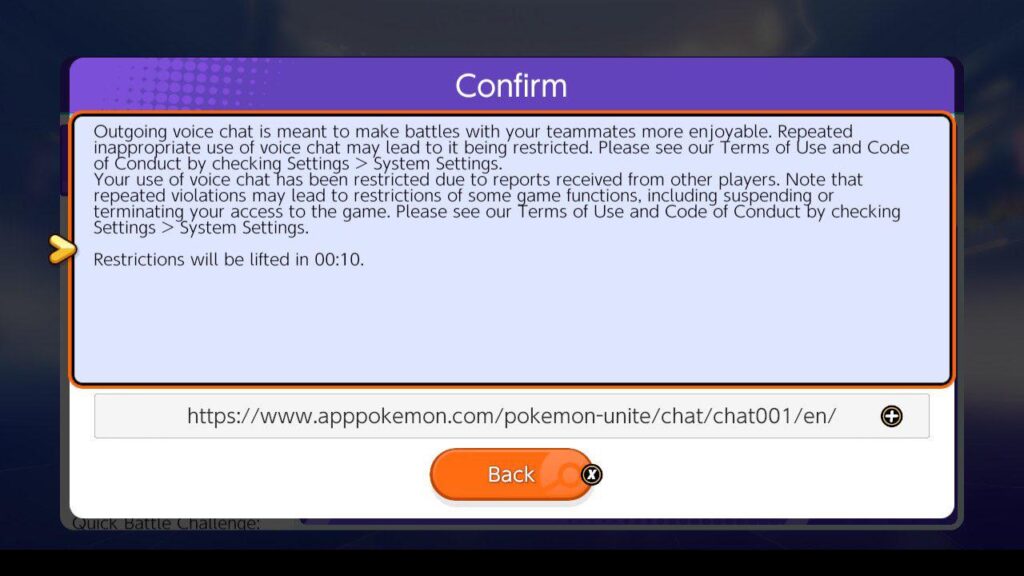 Is there anything players can do?

Now, some players have been trying to get in touch with the Pokemon Unite support via mail and ticketing system about this issue. But, apparently, the game’s support doesn’t reply to messages about account bans, fair play points deductions, or penalities. Players are furious as many have invested money in the game. A ban can cost a lot of the player’s precious time to complete missions. The report system of Pokemon Unite is fully automated, hence, the issue. Here’s what a Reddit user, The_ineffable_sage had to say.

“As a general rule, we do not reply to inquires regarding… account bans”?! Really?! So if this guy gets banned for fuck all, after dropping real cash on your game, you won’t even reply to his inquiry?! That’s bullshit. I dropped $7 on this game. Almost dropped another $20 last night, but I won’t now, if that’s the way they treat their player.

Many players suggest reporting the issue on Twitter and tag the Pokemon Unite support. When all these players raise their voices, the game’s support will take action. Here’s what a Reddit user, cosmonaut42 had to say.

I find some of these companies respond quicker if you open a ticket then go hard complain at them on Twitter and other popular socials. Idk about this game but others tend to respond quickly when you get public about it.