Qualcomm to announce Snapdragon 775G SoC officially: Here’s all you need to know

Qualcomm’s Snapdragon 865 made it big in the world of tech. A device with that processor never fails to be listed on the top-performing ones. The last we heard from Qualcomm was about the Snapdragon 865+, which is delayed and assumed to release in 2021. But here we are with a new chipset’s release date as close as any time! Snapdragon 775G SoC is all set to release soon. An image has been released from Tencent’s QQ news. It reads how Qualcomm’s Snapdragon 775G will support the 5G network and also, includes important launch details. 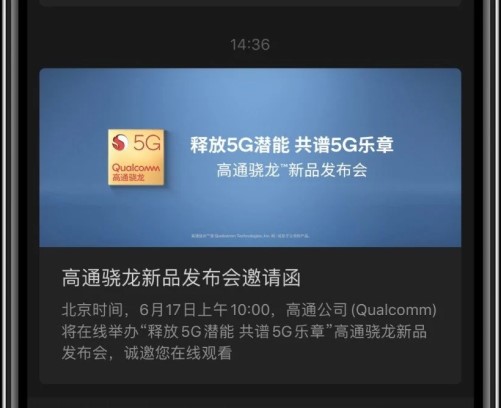 Supporting the rumors, Xiaomi’s CC10 is most probably going to pack Snapdragon 775G chipset with an octa-core processor. You can expect a power-packed performance with this combination, at a very affordable price.

As you can see in the image above, the Qualcomm is all set to host a lunch event. This event will take place on the 17th of June 2020 to officially announce the launch of the Snapdragon 775G chipset. The shipping of the chipset will start very soon after the official announcement. To be precise, it has been reported that Snapdragon 775G chipset will start shipping in the mid of June 2020.

Rest assured, we post related content and updates every day, so stay tuned! Also, share this article with all those who are waiting to buy a device with Snapdragon 775G chipset!