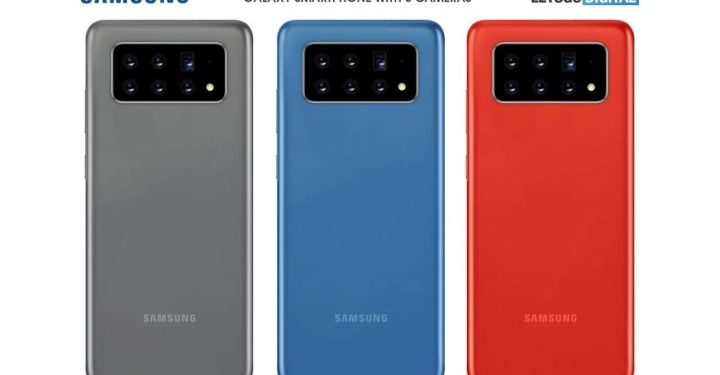 Samsung is a pioneer tech company that is currently on the top tier of best smartphone brands. Known for the innovation and fantastic performance, Samsung is officially on to the next level of technology. As you read in the title, Samsung is working on tilting cameras. The patent is out with the working image.

Samsung applied for a patent in the month of December 2019 with WIPO (World Intellectual Property Office). It was regarding a 6 rear-camera module that they’re working on. The mere fact that Samsung is working on 6 cameras could excite a generation. But the brand has taken it to the next level.

All about the 6-camera module with tilting cameras

The patent was published on June 11, 2020. Samsung is working on 5 tilting-camera set up. The 6th one is a periscopic lens/ telephoto camera. As you can see in the image given below, the possibility of a packing tilting camera is shown in both 5-camera as well as 6-camera setup. 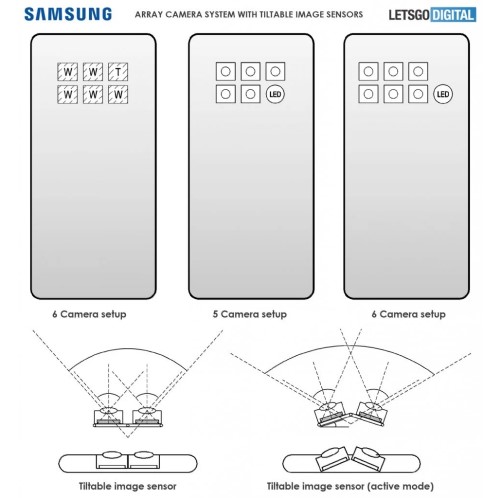 The first mode shows how all the cameras are stationary, just like any existing smartphone of 2020. But the active mode is when the cameras are tilted/ tilt. The five cameras that can title are wide-angle cameras. They are arranged horizontally, 3 in a row. The 6th one is followed at the bottom which is, as mentioned already, for telephoto. You can also spot an LED as issued in the patent.

The tilting cameras can tilt both horizontally and vertically. This setup will support a greater focal length that will highly enhance the image capturing. Sources suggest that Samsung might pack 5-wide-angle camera sensors in the tilting module to get even better range. We can also safely assume that the tilting cameras will allow users to take panoramic shots without even moving the camera. Additionally, the tilting cameras will introduce the world to the ‘pano-bokeh effect’. One will be able to create a bokeh effect (background blue) on a panoramic image and that’s where the name comes from.

Status of the 6-camera Samsung smartphone

Though the concept leads us to think about what future awaits us in the world of tech, currently, these gadgets could cost one a fortune. Excluding that, even to produce these kinds of devices in bulk is nearly impossible. From range to low-light capturing, everything gets better with the tilting camera module.

The device might even require a pop-up setup. One could only imagine how thick the device could get if it equips the titling camera on the rear end just like any other smartphone. The patent indeed has got details that convey shortfalls like the size and dimensions. There are currently not even a trace on where this concept stands right now and how far it is from practical execution. Though this patent is the only live information, it opens up dozens of beams towards future gadgets.

Rest assured, we post related content and updates every day, so stay tuned! Also, share this article with all those who would love to read about this cool concept from Samsung!

Qualcomm to announce Snapdragon 775G SoC officially: Here’s all you need to know

Qualcomm to announce Snapdragon 775G SoC officially: Here's all you need to know