Facing the notorious 15-7A error code in Battlefield 2042? Since the launch of Early Acess, players have reported getting stuck with an annoying error code in all game modes. However, there’s some irregularity – some have reported issues with the All-Out Warfare mode but can play Hazard Zone and Conquest, while others have reported issues with all the modes. It varies from server to server. We strongly suspect overloaded servers to be the reason behind this. But, unfortunately, there isn’t any “fix” available for this issue right now. However, the developers have acknowledged the issue and deployed a little something to reduce the occurrences. Read this article to know more.

All of a sudden getting this error in AOW when trying to join any match. Internet connection is fine.

If your gonna charge people for early access it needs to at least allow me to play on day one. 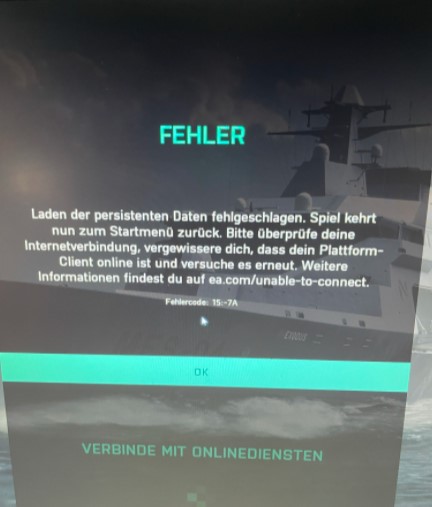 An EA moderator had acknowledged the presence of the issue on the day of the Early Access launch of Battlefield 2042 (Friday, 12 November). He promised that the developers were aware of the situation and working to fix it. Turns out that it was a server situation! To fix it, the developers performed backend maintenance on Saturday. They claimed to be able to reduce the number of error reports across servers.

Throughout the day we’ve performed focused backend maintenance, targeted at reducing the number of times you see ‘Error: Persistence Data (2002G)’. These changes are active now, and are being actively monitored We’re seeing significantly reduced errors, and will keep on it

However, we are still coming across reports of players facing the Unable to load persistence data error in Battlefield 2042.

The unable to load persistence data problem is getting worse. I have had 1 game so far today after 15 tries and that game kicked me out just before the win. My character suddenly lost its head and I found myself looking backwards through a headless body. The character would not answer mouse or keyboard commands. The game lost sync and kicked me out, since then I haven’t gotten into game. – Reported an hour ago on the EA Answers HQ forum

So, it is clear that the maintenance couldn’t get rid of the error codes completely. But, the developers have promised to monitor the situation closely – we will have to wait for them to develop a working solution. However, fans are not at all ready to keep patience as they have paid extra to enjoy the Early Access.

For more updates on Battlefield 2042 and other video games, stay tuned to Androidgram!