You can finally try out the upcoming, very promising Battlefield 2042! Although the official release date for the same is November 19, you can now participate in the open beta phase to try the game out early. Battlefield will be multiplayer, and hence, a proper voice system is what we expect. And, of course, the developers wouldn’t want to exclude a voice chat system in a videogame claiming to be next generation. Below, you will find a complete guide on the voice chat system of Battlefield 2042. Keep reading to know how to use or enable voice chat in Battlefield. 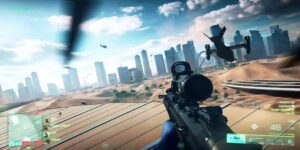 How to enable & use Voice Chat in Battlefield 2042?

As promised, we will tell you how to use voice chat in Battlefield 2042. Looks like EA has done a fine job on this one. With the general beta phase kickstarting tomorrow, everyone is excited to try out the new much-awaited shooter game with their friends. In multiplayer games like Battlefield 2042, the voice chat feature is sometimes heavily misused. We recommend maintaining a friendly environment on voice chat so that everyone can enjoy playing the video game together. Here’s how you can voice chat with friends while playing the game.

First, you will have to open the Options menu in-game. Next, select the General tab and then the Communications tab to reveal a list of options for voice chat. Find the toggle option for Enable Voice Chat. Toggle to enable voice chat. Once done, you will be able to customize your audio experience further. You can lower game audio and customize the voice chat audio volume as well. There will be a few important options for the microphone too. You can customize your mic volume, change keybinds for voice chat, and change your voice chat channel. Want to control what you say using push to talk feature? You have that as well. Overall, Battlefield 2042’s voice chat system is expected to be very robust and has a lot of options. You can customize them as you like.

Battlefield (BF) 2042: How to equip & add attachments to weapons?

Battlefield (BF) 2042: How to equip & add attachments to weapons?