Is Google Encrypted Search not working for you? If so, you are not alone. Many users have reported facing issues with the encrypted search query of Google. Well, this article includes a fix for the same. Keep reading to know!

Google introduced SSL, commonly known as encrypted search, back in 2010. With SSL, the connection between your computer and Google is encrypted. So basically, no one else will be able to see your search results or activities. However, SSL is limited in terms of security. As you may know, cyber security is of utmost value these days. In such times, more and more audiences are growing familiar with the do-s and don’t-s of the internet. Users soon discovered that SSL has notable limitations and that some non-encrypted websites can still track their search queries and source. This is actually a cause of concern since many websites still use HTTP. To tackle this, many users started using the encrypted URL that supposedly blocked HTTP websites from accessing search queries and the source.

With encrypted.google.com, HTTP websites you visit will not be able to identify where you came from or what your search query was. HTTPS websites, on the other hand, will receive your information normally. HTTPS is basically HTTP with encryption. So, you are relatively safe and the cause of concern decreases with this workaround. But some users have reported that the Google Encrypted URL has somehow stopped working for them. Every time they type a query and press Enter, they are redirected back to Google’s Home Page. So, is there a way to fix this problem? Let’s find out!

How to fix Google Encrypted search not working?

Although the SSL feature was officially announced, Google never mentioned anything about ‘encrypted.google.com’. As a result, there are no official workarounds to this problem. However, if you are using the encrypted search URL directly on the browser, the process may not work. Instead, you’ll need to add the Google Encrypted URL as a default search engine. Also, make sure you are using the Chrome Browser. To do so, follow these steps:

1) Click on the three dots in the top-right corner and select Settings.
2) Select the Search Engine tab and then Manage search engines and site search.
3) Beside Site Search, click on Add.
4) Now, add the following information and click on Save: 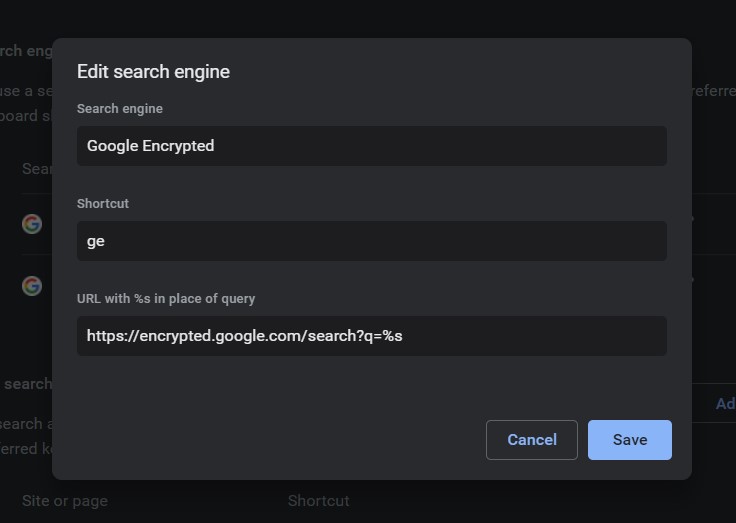 5) Once done, this search engine will appear in the list. Click on the three dots beside ‘Google Encrypted‘ and select Make default.

That’s it. You should now be able to use the Google Encrypted Search URL with every Google Search. We hope this article was able to solve the issue for you. For more such articles, stay tuned to Androidgram!