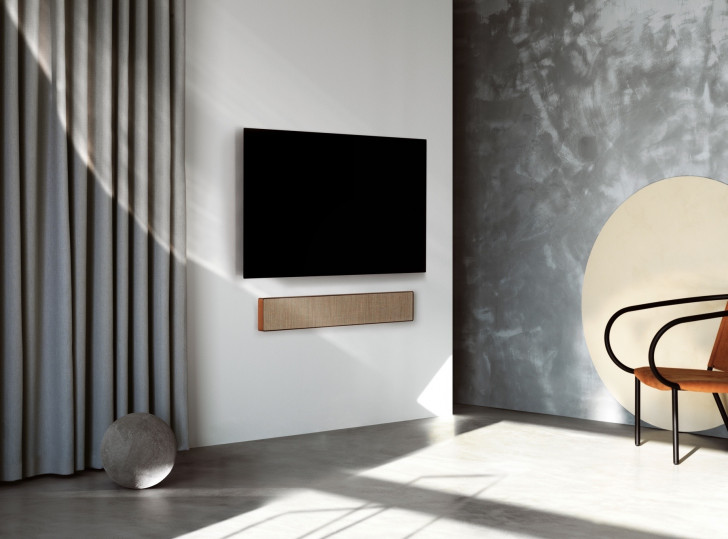 B&O holds a history of developing speakers which do not look similar to other speakers due to the firm’s minimalist aesthetic. The firm has been busy preparing a B&O soundbar which may really complement its conical shaped speaker which was introduced sometime ago. The B&O Beosound Stage comes with a sleek, thin design having Kvadrat fabric as well as metal or wood housings.

This is the first true B&O soundbar meant for televisions and has spared no design or expense. It comprises of 11 custom speakers, with a 50 Watt amplifier in each. You also get four 4 inch wide woofers as well as 2 inch middle-range domes coupled with one 0.75 inch tweeter. There is also an extra set of 0.75 inch and 0.5 inch tweeters on either ends of the soundbar. According to the firm, placing these speakers at a 45° angle aids in producing a 3-dimensional sound effect. And, the Beosound Stage comes with Dolby Atmos support but naturally.

The B&O Beosound Stage not only connects to your television set for audio but also comes with support for AirPlay, Chromecast, and Bluetooth streaming. The basic Beosound Stage model comes with a choice of either bronze or aluminium and is price at €1,500 while the smoked oak wood variant is priced at €2,250.

Social VR platform called AltspaceVR is all set to come to Oculus Quest this 12 September, as per an official Twitter announcement.

Social VR networking application is best remembered for being bought by Microsoft back in the year 2017 after almost shutting down. However, the low-lying visual designs as well as wide accessibility both have led to AltspaceVR being referred to as a staple social app among the industry professionals and supports.

Altspace comes with minimalistic avatar and environment, often mistaken to offer a social experience which runs nicely on low-end systems as well as scales with every simultaneous user. Due to this, AltspaceVR hosts a high amount of professionals which may otherwise not be found easily in many social VR applications.

The AltspaceVR comes with a 3-dimensional Audio Attenuation System which makes a conversation sound like it is happening with some sort of spatial accuracy like it otherwise would in real world. Besides, the users can join the big-scale events as well, with the most eminent example being the recurring Reggie Watts live shows. The events are segmented into separate individual sessions which comprises of a no. of other users in each room.

Users of all major headsets can download AltspaceVR on Steam for free. Besides, the app is also available for a free download on Oculus Rift, Gear VR and Oculus Go storefronts.