[Updated: November 11] Pokemon Unite Decidueye Release Date: When will it be available? 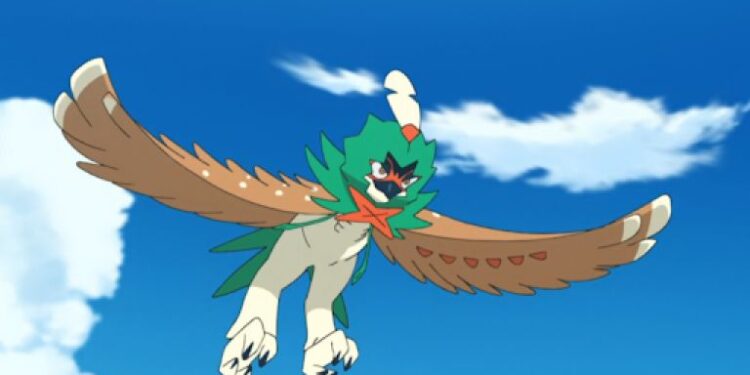 According to a data mine report, Decidueye may be added to the Pokemon Unite Roster on November 19, 2021. Decidueye will feature three stages of evolution – Rowlet at Level 1, Dartrix at Level 5, and finally, Decidueye at Level 7. Its role will be of a Ranged Attacker, according to the data mine report. You can take a look at the Twitter thread by Sobble’s Unite Datamine revealing all this information:

Note: The above is not official information – the developers have not yet confirmed any of the above.

The original article from November 9 follows:-

The Pokemon Unite team never fails to keep their fans excited! We just received the update for the second season of Pokemon Unite’s battle pass – a lot of new content for fans. However, the team wasn’t yet done surprising us. So, what are we anticipating this time? It’s a new Pokemon, guys! And, the hints are strongly pointing at the popular seventh-generation Pokemon – Decidueye. Read this article to know more about the upcoming member of Pokemon Unite’s Roster and possible release dates.

Pokemon Unite Decidueye Release Date: When will it be available?

Right when fans were planning enthusiastically on getting the all-new battle pass of Pokemon Unite, the team also announced the arrival of a new Pokemon. However, there was no mention of any release date. We are expecting the release of new Pokemons during the Christmas update. So, will we see the release of Decidueye during Christmas? We cannot confirm the same, but there’s definitely a possibility. Here’s the official tweet by Pokemon Unite:

Nock nock! Who is that flying true like an arrow in the #PokemonUNITE arena? pic.twitter.com/GX4YMVf7RR

Diehard fans of Pokemon took no time to piece the puzzle together – it’s the fan-favorite archer, Decidueye! Decidueye is a Grass or Ghost-type Pokemon and was first introduced in the seventh generation of Pokemon games, Pokemon Sun and Moon. It is a skilled archer, capable of firing arrow quills from its wings bearing utmost accuracy and precision. Decidueye is also capable of skillful camouflaging and hence, can launch a secret attack on its enemies.

In Pokemon Unite, the extremely popular owl-archer could assume the role of an Attacker, Supporter, Speedster, or even an All-rounder.  Although the Pokemon Unite team didn’t reveal the Pokemon directly, it could be easily guessed from the picture posted on the official Twitter account. As you can see from the official tweet above, no other information regarding the same was revealed. Fans are extremely excited about Decidueye joining the Pokemon Unite roster. However, they eagerly want to know the release date of Decidueye. As of now, we don’t have any official information regarding exact release dates. We will update this article when we receive further details regarding the same. Stay tuned to Androidgram!

The Riftbreaker: How to get and extract water?